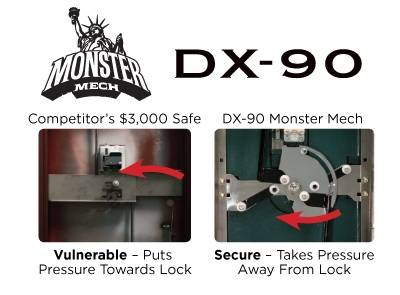 If you want superior security, then you want a Liberty gun safe that is equipped with Monster Mech. Why Monster Mech? Because it truly is a thief’s nightmare and here’s why!

What is Monster Mech?

Why is Monster Mech a Thief’s Nightmare?

On top of that, you get Liberty’s SureTight Handle and Slip-Clutch mechanism that prevents the bolts from retracting. If a thief attempts to torque your safe’s handle with a pipe, the slip-clutch disengages the handle from the Monster Mech to keep your safe secure. Between the Monster Mech and the patent-pending slip clutch mechanism, you have a match that cannot be beat. Your safe will be the nightmare of any thief who attempts to break into it.

In 2009, one of Liberty’s customers from Tyler, Texas reported that the Presidential 50 safe he had just purchased two weeks earlier stood up against a 5-hour attack by thieves. This safe was equipped with the GX-480 Monster Mech. The thieves spent five hours trying to break into the safe using a variety of tools, including prybars, crowbars, sledge hammer, pick axe, hammer drill, hatch, punch and electric saw.

Now, we know not many thieves are willing to spend five hours trying to break into a safe. But it is good to know while you are away for an extended period, your Liberty safe with a Monster Tech locking mechanism will stand up to thieves.

MADE IN THE USA